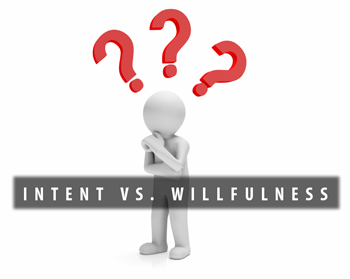 In Austin, TX, an individual convicted of conspiracy recently had his conviction overturned by the 5th Circuit Court of Appeals in New Orleans.  During oral arguments for the appeal, the Austin American–Statesman newspaper stated, “The federal judges weighing his appeal agreed there was a fine line to draw between accomplices and enablers.”  The Austin American–Statesman continued, “Prosecutors had to show intent, not just that someone had an association with unsavory characters, because that could ensnare everyone from a grocery store cashier to a Lamborghini car dealer.”

The legal definition of intent, in many ways, depends on the context of the law being violated.  It ranges from:

Intent expresses mental action at its most advanced point, or as it actually accompanies an outward, corporal act which has been determined.  Intent shows the presence of will in the act which consummates a crime. It is “the exercise of intelligent will, the mind being fully aware of the nature and consequences of the act which is about to be done, and with such knowledge, and with full liberty of action, willing and electing to do it.” Burrill, Circ. Ev. 284. and notes.1

Historically, the usual definition of the term willfully, by the 5th Circuit Court of Appeals, means that the act was committed voluntarily and purposely, with the specific intent to do something the law forbids; that is to say, with bad purpose either to disobey or disregard the law.2 The 5th Circuit also clearly defines the word knowingly, as an act done voluntarily and intentionally, not because of mistake or accident.

Willfulness is therefore synonymous with Intent.

IRS Special Agents are trained to identify elements of willfulness, a key element of proof necessary in all criminal income tax violations as well as numerous federal violations. The element is generally inferred from circumstantial evidence.  Willfulness is not defined by statute, therefore it is established by precedence through court decisions.  The Supreme Court in Spies v. U.S. 317 U.S. 492 (1943) commonly referred to as “Spies evasion” stated:3

If the taxpayer failed to file a return, an evasion case can be maintained only if the taxpayer engaged in an affirmative act to conceal or mislead. Spies v. United States, 317 U.S. 492, 498-99 (1943). Passive failure to file tax returns is not tax evasion. In Spies, the Supreme Court, by way of illustration, and not by way of limitation, set out examples of conduct which can constitute affirmative acts of evasion: (A) Keeping a double set of books. (B) Making false or altered entries. (C) Making false invoices. (D) Destruction of records. (E) Concealing sources of income. (F) Handling transactions to avoid usual records. (G) Any other conduct likely to conceal or mislead. See also, United States v. Brooks, 174 F.3d 950, 954-56 (8th Cir. 1999); United States v. Meek, 998 F.2d 776, 779 (10th Cir. 1993).

As an old school Special Agent, I was taught that “knowledge is synonymous with intent.”  So to prove one element of tax crimes, I learned that intent and willfulness could be inferred through documenting knowledge and willful unlawful acts.  In an evasion case, involving a doctor, the willfulness element was proven by introduction of his college transcript showing he attended law school.  This allowed the Assistant US Attorney to infer the doctor knew that deducting all personal expenses as business expenses was intentional.  In another evasion case, involving a marijuana smuggler, willfulness was inferred by his use of currency, nominee names, conduits, multiple false identifications, hidden assets and bank accounts, and corporate shells in an attempt to evade his income taxes.  Both individuals were convicted by jury and sentenced to prison.

On the other hand, IRS CI enforces Title 31 USC 5324, structuring of cash transactions to evade the reporting requirements of 31 CFE 103.22 (requiring CTRs).  This statute does not require proof of willfulness or intent and is known as a strict liability statute therefore knowledge of the activity is enough to prove the element of the violation.  See Article, May 2014, in the Beacon Archives on the Sage Investigation website regarding structuring.