Collusion Between Controller and IT Staff Results in Embezzlement 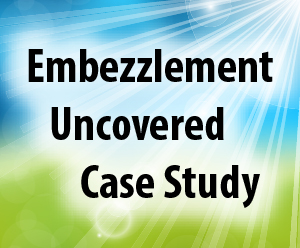 The Association of Certified Fraud Examiners “Report to the Nations – 2014 Global Fraud Study” reveals that there are “Red Flags” to be considered when a business is experiencing financial difficulties or things just don’t feel right, including: the suspect was a white male, on the verge of retirement, has control issues and an unwillingness to share duties and he may feel threatened by a new more educated manager.   Also thing to consider are small businesses have poor internal controls and lack an independent audit.

A family-owned small business was embezzled by a trusted long-term employee, a controller. He was very abrupt and intimidating with employees and management, and he controlled all the finances for the business. He set up a system wherein he paid vendors by check through Quicken, which is a single entry accounting system that is not designed for business. After cutting a check he destroyed the invoices that documented the transaction, claiming that was in accordance with IRS regulations. He used this same system to help himself and his co-conspirator to money belonging to the company. His scheme was to write a check to himself and his associate and change the payee on the Quicken records to show that the payment was a draw taken by the owner. He employed this scheme for three years and accelerated it when he found out the owner’s son was studying accounting at the university with the goal of providing oversight of the accounting system.

Sage Investigations was called in by the company’s attorney, our investigator found it very strange that invoices were routinely destroyed. Our investigator immediately examined the controller’s Quicken files, specifically transactions over $1,000, and found some anomalies. Upon checking the bank statements he located the check numbers that corresponded to the anomalies and found that in some instances the payees in Quicken were different than the payees on the checks; he discovered that the checks were actually paid to the Controller and the IT person (his co-conspirator).

It was determined that the Controller built a $300,000 home in Colorado and the IT person built a $180,000 home in the Texas Hill Country, and neither home was mortgaged. The investigation ultimately revealed that together they stole $800,000 from the small business. Sage assisted in establishing a new accounting system and a new controller was hired. The owner’s son graduated the university and now oversees the accounting system and operations of the company. Result: The thieves were not prosecuted but entered into a private settlement, which was handled by company attorneys.

If you or your clients are experiencing any of the red flags mentioned above call Sage Investigations, LLC at 512-659-3179 for a free 20 minute consultation.  Let Sage shed light on the truth for your clients.