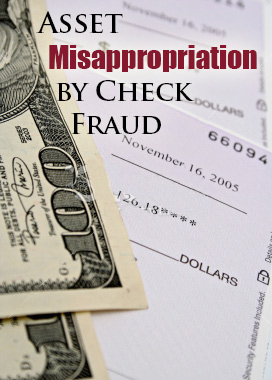 The Association of Certified Fraud Examiners recently issued its Report on Fraud to the Nation for 2014.  The report cites three major areas of occupation fraud: asset misappropriation, corruption, and financial statement fraud.

“Small businesses are both disproportionately victimized by fraud and notably under-protected by anti-fraud controls generally because they lack resources.  The most prevalent fraud area is asset misappropriation committed by individuals in the accounting department.  The perpetrator is generally a male and the longer the fraud last (sic) the more financial damage is caused.”

A bookkeeper for a lumber mill with over 250 employees issued multiple fraudulent payroll checks to individuals with identification, who cashed the checks through a nearby grocery store check cashing operation. The foreman of the company solicited twenty-five employees (some illegal immigrants) with identifications to join the conspiracy by cashing the checks on a Friday afternoon in return for paying him a kickback. In some instances, multiple checks were issued to the same individual. The company bookkeeper used check stock similar in color to the Intuit QuickBooks check stock of the company to prepare the counterfeit checks without the knowledge of company management. The company owner customarily allowed his name to be stamped on the payroll checks rather than signing them himself.

Employees typically lined up outside the grocery store waiting to cash their checks every Friday.  The theft was efficient until one teller took a break and then returned to replace another. The teller realized she had cashed a check earlier in the day for the man standing before her. When she contacted her manager, the man left the building. The grocery store tellers immediately stopped cashing checks and reviewed the checks already cashed. They contacted the manager of the in-store branch bank who instructed that they should process the checks through the bank to see if they would clear. The checks were declined for payment by the lumber mill, thus creating a loss of $25,000 for the fraudulent checks already cashed. The management of the grocery store contacted the lumber mill, but their management declined to cooperate in an investigation, and a civil suit was initiated and ultimately settled. No one was prosecuted and the bookkeeper was promoted to dispatcher. The check cashing operation sustained the loss of $25,000.

The lumber mill lacked internal and management controls that would have prevented the issuance of fraudulent checks. Mill management did not cooperate with the investigation, which allowed the fraud to be perpetrated and no one prosecuted. The grocery store lacked internal controls for the check cashing operation. They did not know their customers, they lacked security cameras, did not photocopy identifications, and the staff was untrained in fraud prevention. The presence of the in-store bank caused the destruction of crucial evidence, the original checks to be destroyed.  Under Check 21 policies and procedures prescribed by Public Law 108-100 dated October 28, 2003, only  substitute checks were returned to the store.

In this instance the grocery store owner should have considered hiring a competent business litigation attorney and Sage Investigation for the investigation, forensic accounting, and any litigation support necessary for the case. Sage would have also provided expert witness testimony.