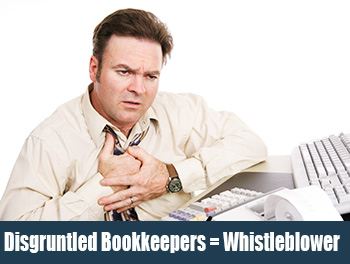 Income tax evasion and fraud occur daily in the United States, and Internal Revenue Service (IRS) studies show that the largest arena of fraud is the small solely-owned business. The average citizen receives wages or a salary and taxes are withheld, therefore their opportunities for fraud are limited to false deductions and the understatement of cash jobs, which was referred to in the past as the “underground economy.” The fraudulent small business owner is at double risk. He or she bears first the risks inherent in fraudulent activity, and second, the risk of employees (especially bookkeepers) learning of their fraud schemes and seeking a reward for being a “Whistle Blower.”

Consider the bookkeeper who witnesses the boss taking lavish trips, deducting personal expenditures as business expenditures, acquiring personal assets in the business name, and skirting labor and environmental laws. During her employment, the bookkeeper learns that the IRS previously conducted an audit, yet the owner continues fraudulent tactics to reduce income. The bookkeeper enjoys her work, and her periodic requests for a raise are granted, so she keeps her observations to herself. Until her next raise request is denied. Suddenly the bookkeeper isn’t enjoying her work so much. Fueled by her disappointment, she becomes concerned about her culpability in the scheme to reduce the owner’s taxes. She contacts a relative in law enforcement who connects her with the Criminal Investigation Division, and soon she becomes a confidential source for the IRS working inside the small business. The above activities could violate Title 26 of the United States Code relates to Income Tax.

§ 7201 Attempt to Evade or Defeat Tax – Any person who willfully attempts in any manner to evade or defeat any tax imposed by this title or the payment thereof shall be guilty of a felony.

§ 7206(1) Filing a Fraudulent Return – Willfully makes and subscribes any return, statement, or other document, which contains or is verified by a written declaration that is made under the penalties of perjury, and which he does not believe to be true and correct as to every material matter.

Your clients need to be aware of the information they provide to a bookkeeper or a secretary and the contracts or promises they enter into. They need to understand that when contacted by the IRS Special Agent their bookkeeper or secretary will likely disclose all relevant business and personal activities to protect themselves.

A small business owner employed a bookkeeper to keep the books and records of two interrelated companies and, like in most small businesses, the personal affairs of the owner. The bookkeeper was the “motherly type” and the owner confided in her about her activities. As the owner went about her daily business and personal activities she provided the bookkeeper with receipts for purchases and activities. Initially, the bookkeeper did as instructed, and posted the personal activities as meals and entertainment, insurance, office supplies and other business expenses. When she asked for a raise in salary she generally received it, but when the owner experienced a downturn in business sales, she thus declined to make the increase. The bookkeeper then refused to continue posting what appeared to be personal items as business expenses, and she expressed concern to her employer. The owner responded with a contract that held the bookkeeper harmless and agreed to pay attorney fees in the event the IRS appeared.  After a 10 month period of acting as a confidential source for IRS CI, they  executed a search warrant at the business and home of the business owner and seized hundreds of boxes of records. The astonished business owner was “read her rights” and interviewed by agents. Sage Investigators were hired and accessed the seized records, scanned volumes of pertinent records, interviewed witnesses, and assisted defense attorneys. The investigation lasted for more than 18 months.  Ultimately, the case was forwarded with a recommendation for prosecution but became hung up in the review process at the Special Agent in Charge (SAC) and at Chief Counsel levels. Three months before the four years anniversary of the search the case was declined with no formal letter of declination. The clients spent a lot of money on their defense, but were happy not to face prosecution. They subsequently cleaned up their improper ways and went on with life. The old adage applied “you can beat the time but you cannot beat the ride,” which was costly since the client paid for the defense attorney representing the bookkeeper.

Call Sage Investigations at (512) 659-3179. We stand ready to help you defend your clients against the IRS.