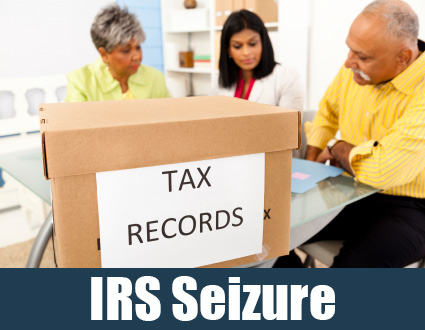 Every day brings a new story about the IRS seizing bank accounts of American citizens. From grocery stores to dairy farms, from construction companies to other small businesses; if cash comes in, so does the IRS. In days past the IRS Criminal Investigations (CI) seized cash and assets based on laws passed in the 1980s, and as President George H. Bush said, “asset forfeiture laws allow the government to take the ill-gotten gains of drug kingpins and money launderers to put cops on the street.” Now, however, CI routinely reaches far beyond the arena of drug money to seize bank accounts from non-criminal citizens with no income tax liability, just because of the appearance of a violation of Title 31 Sec. 5317(c)

(2) Any property involved in a violation of section 5313, 5316, or 5324 of this title, or any property traceable to any such violation or conspiracy, may be seized and forfeited to the United States in accordance with the procedures governing civil forfeitures in money laundering cases pursuant to section 981(a)(1)(A) of title 18, United States Code.

The Compliance Officers can trigger a Suspicious Activities Report, which is accumulated by FINCEN and scrutinized by IRS Special Agents. Knowledge of this transaction is synonymous with intent in this instance, so the Special Agent does not have to prove intent; thus, it is called a “strict liability statute.”

A remedy is for the accountant preparing the return (or a forensic accountant following up after the IRS reacts to a filed return) is to reconcile the return to the books and records of the client.

A self-employed businessman hoarded cash from his business receipts that was part of reported taxable income.  IRS Special Agents seized over $200,000 from the bank accounts of the businessman for structuring transactions in violation of 31 USC 5324. How did this happen? Bank employees advised the businessman that cash deposits of over $10,000 require bank employees to prepare a Currency Transaction Report (FinCEN CTR Form 112) and file the report to FinCEN. Further, he was instructed to make smaller deposits not more than $9,900 in a 24 hour period and to deposit the cash at their particular branch bank only. In following their instructions, he violated the “strict liability” statute of Title 31 USC 5324, and the bank employees entered into a conspiracy with the businessman to avoid FinCEN Currency reporting requirements.

The Compliance Officer at the main office of the bank, unknown to the local bank branch employees, noted the series of deposits and followed protocol by filing a Suspicious Activities Report (FinCEN SAR, Form 111) with FinCEN, which prompted the investigation and seizure of the bank accounts by IRS CI. The IRS CI Special Agent made no attempt to contact the bankers to determine either the circumstances surrounding the deposits or relevant conversations between the banker and the businessman.

The Sage Investigator attempted to interview the bank employees based on the admissions of the client, but they refused to be interviewed.

During the investigation, Sage reconciled the QuickBooks business records to the bank accounts and the bank records with the income tax return prepared by a CPA, and proved that all the business income, including the cash hoarded funds, was properly reported on the prior year returns. The reconciliation and copies of the returns were released to the Special Agent for review.  The Assistant US Attorney (AUSA) and Special Agents would not relent in their efforts to prosecute the businessman and retain his seized money. After months of investigation and negotiating the case, the AUSA finally advised the businessman’s counsel that he was declining to prosecute the taxpayer. In the end, criminal charges were not recommended and civil remedies were imposed and a sum of cash was forfeited.

Please advise your clients that they cannot deposit slightly less than $10,000 cash into their bank account periodically without drawing attention of the bank’s compliance officer. It is generally known by the public that depositing currency in amounts over $10,000 is reported to the government. What is less well known is that arranging deposits under $10,000 in currency consistently is reported through the FinCEN SAR process. Attempts to cause the bank to avoid reporting the currency deposits is a criminal offense, and the funds are seized by IRS Special Agents, almost always to the shock of the average, non-criminal American citizen.

When you need to efficiently and quickly follow the money and analyze complex data to find the facts, Call Sage Investigations at (512) 659-3179 and let our 26 plus years of experience as an IRS Special Agent work for you.