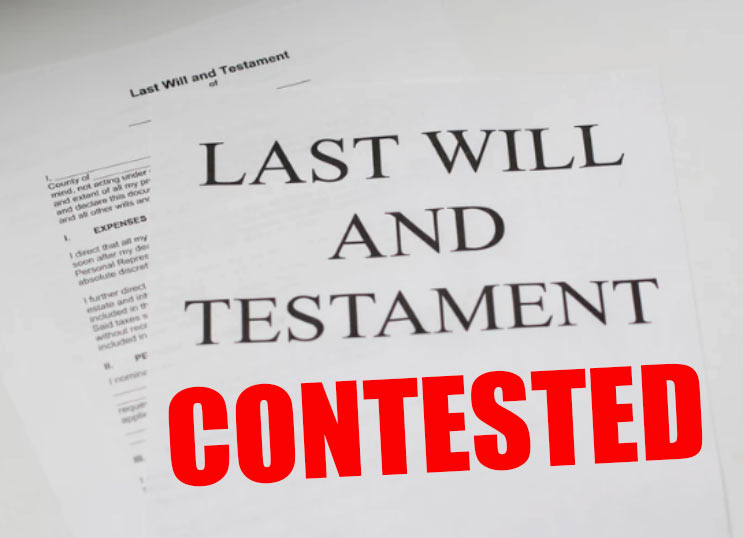 A “will” is generally defined as an instrument by which a person makes a disposition of his/her property, to take effect after his or her death, and which by its own nature is ambulatory and revocable during his or her lifetime as defined in “Black’s Law Dictionary 5th Edition.” To “contest” a will is a proceeding sui generis (its own kind or class, peculiar), a suit in rem (a technical term used to designate proceedings or actions instituted against the thing, in contradiction to person actions), having for its purpose the determination of questions of construction of the will or whether there is or is not a will.

A male and female child were adopted by two parents 50+ years earlier, and during that period the father died, and the mother passed, 15 years later and left a will. During the mother’s last ten years she was of poor health from dementia and Alzheimer’s, and the son took care of her and saw to her personal and business affairs. As a result of personal conflicts, the son stopped being involved with the mother and his sister took over caring for her mother and the sister allowed the business affairs to run themselves. When the mother died, the sister presented a new will for probate. The will left the son a small cash inheritance and the sister received the remainder. The son retained a copy of a will signed by his mother and witnessed during her healthy years and without undue influence from his sister. The attorneys for the sister filed the last will in probate court disinheriting the son. The son hired a lawyer and a private investigator to investigate and contest the will. After a couple of months of gathering evidence and testimony, a lawsuit was prepared and filed in probate court contesting the will. The attorneys for the sister contacted the son’s lawyer and initially resisted stating that the son was estopped from challenging the will because he accepted a distribution from the estate and he was estopped from offering the second will for probate because of the acceptance of the distribution. After the lawyers for the son briefed the case, it was determined that there were exceptions to the estoppel issues, the sister and her attorneys concurred and agreed to mediate.

The mediation lasted 12 hours, and the sister agreed that her brother should receive 40% of the estate which was accepted, and the case was settled.

This article is a continuation of a series of articles on estate and probate matters. The moral of this scenario is if a will is to be contested, file a lawsuit before the will is accepted in probate and beware of accepting any distributions from an administrator of an estate. There are exceptions in Texas if either or both actions occur, but you may be estopped from using them depending on the circumstances. Beware of administrators or executors bearing distributions and always have your attorney involved in decision making.

Sage Investigations, LLC and its associates are not the ordinary PI firm. We specialize in forensic accounting, consulting, and proving or disproving complex financial matters. As an IRS Special Agent, Edmond Martin has over 50+ years of experience in financial investigations to include: Ponzi schemes, advanced fee schemes, embezzlements of all shapes and size, oil and gas related fraud, shareholder derivative lawsuits, money laundering, theft from estates, and income tax schemes of all levels. Martin has used direct and indirect methods of proof to establish defenses to unreported income and fraud. Martin’s knowledge and methods are “Old School,” but with the use of computer technology, his techniques are modern. With the addition of Jason Slick, a brilliant computer scientist and fraud investigator, the financial investigative DIO model created by Sage Investigations is unsurpassed and is very beneficial to you and your clients.